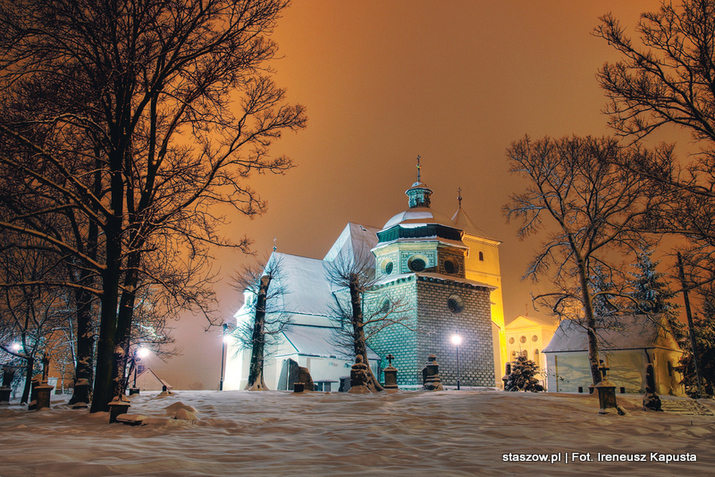 The most valuable landmarked building in Staszów. The first church built at its spot dated back to the 12th century; unfortunately, not a trace remains of that wooden church – it was burned down to the ground in 1214 by Tatar invaders. In years 1342 – 1343 a stone and brick, gothic church was built in its place, christened the St. Bartholomew church. Its construction was funded by then-heir of Staszów, Dorota Tarnowska. The church was altered in the first half of 17th century. In 1610 a tower was added, and in years 1613 – 1618 the Holy Rosary Chapel, also known as the Tęczyński Chapel, was built. The church's interior was rebuilt in 1625, replacing the vaults and divisions.

Through the ages this temple had been rebuilt and renovated multiple times, hence its current shape doesn't resemble its original gothic structure. Only clues about its previous appearance are the tall buttresses and the clear distinction between central nave and sanctuary. Inside the church you can find a unique fresco of martyred St. Bartholomew. Also noteworthy is the rich collection of 17th century embellishments located in the sanctuary. These embellishments were most likely made by a famous stucco decorator – Falconi.