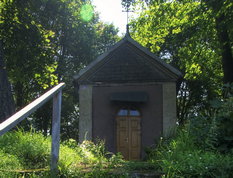 A small village which lies approximately 15 kilometres east of Staszów. In the years 1975-1998 it belonged to Tarnobrzeskie Province, then it was part of Commune of Osiek in years 1867-1954 and finally was annexed into the Municipality of Staszów on January 1st 1973. Wiązownica Mała ("Little Wiązownica") is another former colony of Wiązownica.

There are two old graveyards in Wiązownica Mała, both of them more than 150 years old, and a chapel built in 1910, in a style referencing the Neo-Gothic architectural movement. The main decorative element of this chapel is a wooden altar which contains a copy of Black Madonna of Częstochowa. According to local tradition, this picture is famous for numerous graces and miracles.