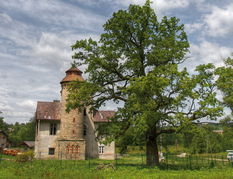 There is a church in Wiązownica Kolonia which was built in 1884, replacing the old 15th-century church which burned down in 1820. Under Russian annexation, local goods were seized by the invaders. Tsarist general Vasily Pogodin became new owner of Wiązownica Kolonia in 1835. Despite the circumstances, General Pogodin turned out to be a good host. In his expansive estate he built a palace, established a sophisticated homestead, and even financially supported the construction of a church. Pogodin was also a senator of the Sejm of the Kingdom of Poland. He died in 1863 and was buried at the parish cemetery in Wiązownica. His daughter, Alexandra, inherited the Wiązownica Kolonia estate. She later married a high-ranking official of the tsarist administration, Alexander Pietrov. The Wiązownica estate remained in the hands of Pietrow family until 1918. After Poland regained independence, Wiązownica Kolonia was parceled out.

After World War II the Pogodin palace still served the local authorities. The descendants of its former owners tried to regain the estate during the 1990s, and succeeded. There is a 400-year-old natural monument oak tree in the palace's vicinity.