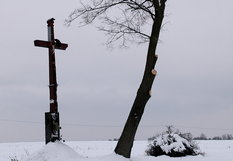 Wiązownica Duża has its own elementary school, kindergarten, and a bakery. The Kacanka river passes through the village.

Local legend claims there were lots of snakes living all around the village. The Polish word for snake is "wąż", plural form "węże". Hence the village's original name – "Wężownica", which can be roughly translated to "The place of many snakes". After those snakes went extinct, the name became irrelevant. Due to a prevalence of elm trees ("wiąz" in Polish) in the village's vicinity, it was renamed to Wiązownica.

First Catholic church in Wiązownica Duża was mentioned in records as early as 1257. Subsequent mentions of a church are dated at the year 1470.