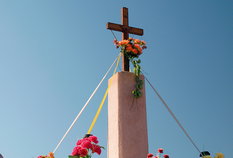 A village which used to belong to the Commune of Wiśniowa. Its name most likely comes from the family name of count Kołłątaj Sztomberg. In the 19th century, Sztombergi had 32 households and 148 villagers. In 1929 those numbers had increased to 38 houses and 230 people.