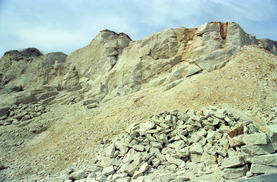 A village located about 18 km from Staszów. Smerdyna was founded in the 12th century as a settlement of smerds; "smerd" is a medieval term for a peasant whose social status has been degraded, decreasing his freedom. That term is assuredly the origin of Smerdyna's distinct name.

Smerdyna used to be comprised of a village colony and farmlands, separated from each other. It appears as a royal hamlet in 15th-century records. In 1508 it was property of Gniewosz family, and in 1620 it was owned by Jerzy Ossoliński.

In 1827 there were 58 househoulds with 401 villagers living in them; by the end of the 19th century their numbers had increased to 650 people. The farmlands of Smerdyna belonged to Klimontów at the time. Statistical data from 1929 tells us there were 140 houses and 822 residents in Smerdyna that year.

Smerdyna is well-known in the region for its quarry, which has played a big part in village's life for more than a century. Historically, the quarry was always an additional source of income for locals. The quarry is still being used to this day by residents who gather sandstone and sell it at neighboring localities. The Smerdyna fine-grained sandsone is an excellent sculpting material; local sculptors have long since processed this stone into gravestones or religious figures – which can be seen in many places along local roads.

There is a vintage small manor house and remnants of other manoral buildings, including a belfry, in Smerdyna. The village belongs to the parish of Wiązownica Kolonia.