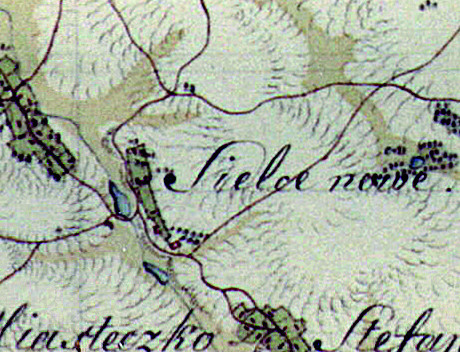 Sielec, a village formerly known as Siedlecz – either from "siedlisko" ("dwelling") or "siodło" ("saddle"). This locality's history is closely tied to the local Evangelical-Reformed Church.

Oldest recorded instances of Sielec appear in documents from 1579; at the time, this village belonged to the castellan of Żarnów, Andrzej Gołuchowski, who was closely connected to the reformation movement of Małopolska. The next owners of Sielec were also in favor of this new religious movement. In the 17th century Sielec was inherited by the Dębicki family, who were reformed Christians. Dębicki took care of local tabernacle. Under pastor Daniel Stephaus, the Sielec protestant community was steadily gaining influence and renown among its peers. Following Stephaus's death, church experienced financial difficulties, until Samuel Cień arrived and improved the situation. He worked in Sielec for nearly 20 years.

In 1758 Stanisław Dębicki sold the lands of Łubnice to prince August Czartoryski, owner of the lands of Staszów. Sielec was included in the Łubnice lands. Despite the fact that prince Czartoryski was catholic, the protestant community fared quite well under his rule. The reason behind that is simple: professional textile manufacturers from Germany had come to Staszów at the time, to take care of prince's business. Those German manufacturers were protestants, therefore continued existence of a protestant community in Sielec proved very beneficial to Prince Czartoryski's interests. In fact, under his rule Sielec became one of the most important places for evangelical-reformed Christians in Poland. It was here that a ceremonious synod was held in 1777.

The tabernacle of Sielec was also supported by next owner of Staszów, Artur Potocki. He helped German colonists settle in Oględów and Niemścice.

In 1827 Sielec had 20 housed and 183 residents. In 1840 there were 330 adults from various localities – including almost 70 people from Staszów – belonging to the protestant church in Sielec. Among the more well-known pastors of Sielec were: Adolf Szefer and his son, colonel Kazimierz Szefer. Kazimierz was the last pastor of Sielec community and an evangelical chaplain of Polish Army; he died in 1939 and was buried at the Sielec cemetery.

Some remnants of the German settlers' presence can still be found in Sielec. There are a few distinct residential and utility buildings, and the tabernacle – which currently serves as a chapel for the Roman-Catholic parish of Koniemłoty.