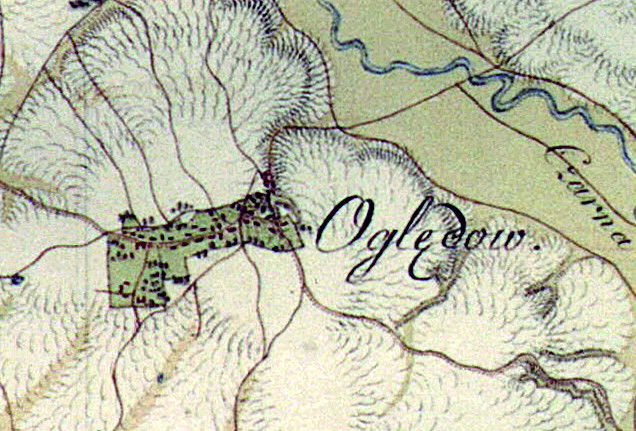 In his chronicles, professor Piekosiński claims that the name "Oględów" comes from the name of its founder – Oględ.

Historical analysis suggests there were some wooden houses present at today's Oględów location as early as 10th or 11th century.

In 1252, Bolesław V the Chaste convened a senate rally in Oględów. A similar rally took place once again, in 1256. In 1357 the quarrel over borders between Staszów and Kurozwęki was settled. Numerous meetings of wealthy people – castellans, provincial governors – were held at the Oględów court during Medieval times. There was also a castle, a surrounding borough, an administrative center, and also the Oględów water mill. There was a quarrel in 1417 about the ownership of Oględów between its potential heirs.

In 1815 Count Jan Potocki established a "grain bank", which distributed grain among needy farmers. He also created a commune treasury with money gained from grain sales. In 1823 the next inheritor of Oględów – Artur Potocki – founded the "Wool Bank", which supported Staszów's clothiers guild. In 1827 there were 41 houses with 320 recorded residents in Oględów. According to chronicler Jan Długosz, Oględów belonged to the parish of Zborów and was property of Jan Rytwiański, Kraków Province governor. The village's property included a farm, tavern, water mill, and large patches of fertile land.

The Commune of Oględów had already existed before 1815, and lasted until September of 1954. A Consumers' Cooperative was established in the village in 1911.

Oględów's residents have actively participated in important Polish events of the 20th century. At least two men from Oględów participated in the January Uprising, both called Żaczek. When Polish Legions matched through Oględów's neighboring lands in 1915, Józef Piłsudski visited the house of Skalski family in the village. In 1936, a memorial plaque was installed into that house's wall, commemorating the visit of First Marshal of Poland. The building was destroyed during World War II, however luckily the plaque survived and was once again displayed on the new house. In 1917 a local unit of Polish Military Organisation was formed in Oględów. Volunteer Fire Department was also created that year to provide cover for the unit's activity while fulfiling training requirements of PMO directives. Austrian authorities soon legalized the Volunteer Fire Department, unaware of its true nature. During 1917 and 1918 the firefighters kept disarming and sabotaging the Austrians undercover, and later many of them officially joined the newly-reformed Polish armed forces.

Oględów has always participated in nationwide people's uprisings. rebellious group "Zaranie" ("Origins") was formed a couple years before the outbreak of World War I. Later on, in the 1918-1939 period, Polish People's Party "Piast"was active in Oględów.

Many of Oględów's citizens took up arms against Nazi Germany during World War II. After September Campaign's failure, those citizens went underground and continued their fight; several dozen of them belonged to the Peasants' Battalions.

On October 1983 Oględów was awarded the Cross of Valour, recognizing its residents' deeds of valour and relentless courage in battle against Nazi invaders. Local school received a memorial plaque on the 90th anniversary of Polish People's Party uprising.