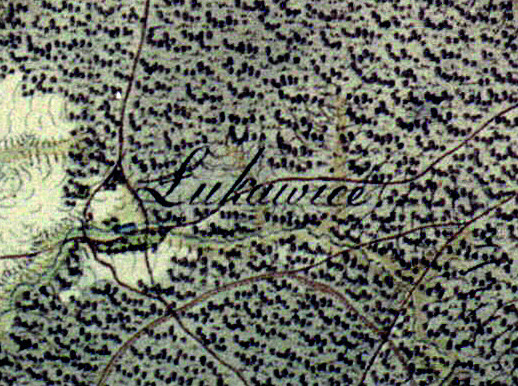 Łukawica lies on the St. James Małopolska Route connecting Sandomierz and Tyniec, which is a modern equivalent of the medieval road leading to Santiago de Compostela.

Łukawica is a relatively new village, its origins date back only to the first half of 19th century. The village's name was most likely derived from Łukawski family, who were its first owners. Another theory claims that the name comes from enfranchisement decrees called "ukaz". Those acts gave peasants legal holding of farmlands. Many so-called "landless" farmers were given their own land thanks to those "ukaz" decrees.

During the 19th-century influx of German colonists to Poland, S. Gerscher was the first one to settle in Łukawica. Other German families followed soon after. As a token of their gratitude for Polish hospitality, they erected a statue of 'Sorrowful Jesus' which remains in its place to this day, and has attained the status of a historical monument.

First written mentions of Łukawica appear in parish notes of Wiązownica dated at 1826. Records also state that Łukawica only had 3 houses and 5 residents in 1827.

Łukawica had always been at the frontlines of recent Polish history. The memory of Józef Piłsudski, who visited the village in 1915, is still very vivid and cultivated. While the battle of Konary was underway, Łukawica had set up its first aid outpost which helped legionnaires injured in combat. Many of Łukawica's residents joined Piłsudski's Legions.

The village's location made it a perfect gathering point for Russian troops during World War II. They set up an elaborate camp in nearby woods, complete with a repairs workshop, field hospital and a command chain. Traces of their presence can still be found – trenches, artillery and tank positions. The Peasants' Battalions were also very active in Łukawica's vicinity. During one of their miliary operations against the Nazis, two of Łukawica's residents were killed in battle – Stefan Zimoląg and Włodzimierz Lech. A monument dedicated to their memory stands in Łukawica. The famous "Jędrusie" unit has also left its mark on this village's short, but quite rich history.

There is a rock quarry in Łukawica (no longer active), which used to employ many residents. Korzenna river passes through Łukawica, dividing the village into two parts: upper and lower.