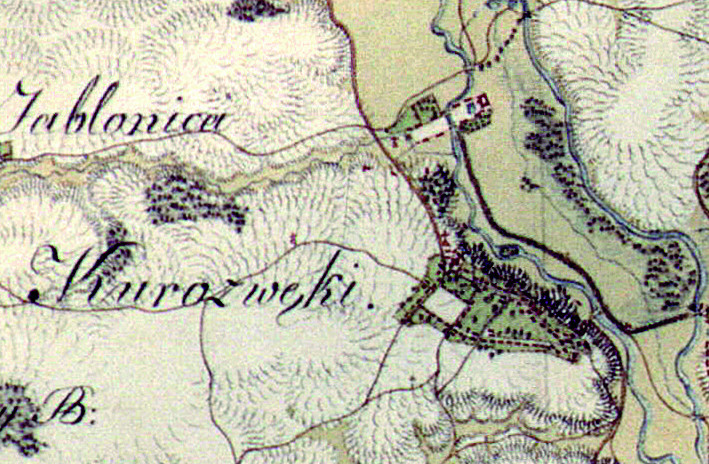 One of the largest villages in the Municipality of Staszów, Kurozwęki is located by the Czarna Staszowska river, 7 km to the north-west from Staszów. Records of its existence date back to the 13th century. In the 14th century, Dobiesław of Kurozwęki built a wood-and-stone palace as the new home for his family. Initially the palace was a stronghold – it served a defensive purpose. It was also one of the very first brick castles in Poland. Centuries have shaped the palace into its current form. Kurozwęki received its town charter in the 15th century. They were property of the Kurozwęcki noble family, and later: the Lanckoroński, Sołtyk and Popiel families.

On June 10 and 11 of 1787, king Stanisław August Poniatowski, returning from his trip to Ukraine, visited Kurozwęki. The palace which hosted the last king of Poland, has endured to the present day. Inside that palace, Old-Polish traditions can still be seen in antique furniture and miscellaneous memorabilia. In 1840, following the fire in Ruszcza, Paweł Popiel moved to Kurozwęki and became its owner. In 1878 he gave the village to his son, Marcin.

Stefan Żeromski spent his 1888 vacation in Kurozwęki, staying at his cousin's house. He documented his stay in "Dzienniki" ("Diaries"). In 1944 the palace was taken from Marcin Popiel and given to the country. After World War II the Popiel estate was converted under the communist rule into a State Agricultural Farm (PGR in Polish) and a horse stable. For several years (until 1969) the palace grounds were used by Social Insurance Institution (ZUS in Polish).

In the 1990s, Kurozwęki palace along with surrounding grounds were returned to their rightful owners – the Popiel family. The estate is currently managed by Jean Martin Popiel.

Kurozwęki are filled with interesting places for tourists to visit and sights to see, such as: the palace, a 15th century church and monastery, horse stable, Platanus trees, a corn maze, a large herd of American buffaloes and a mini-zoo.