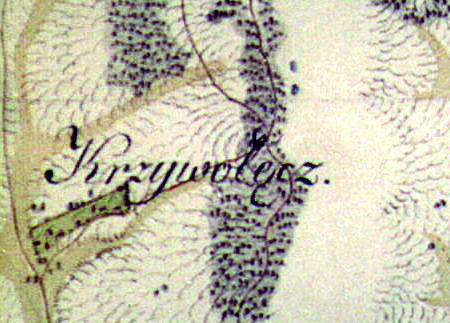 Krzywołęcz is a moderately old village; unfortunately, locating historical records of its founding proved to be very difficult. In the 1770s the village was owned by castellan of Żarnów, Jan Sienieński. In 1827 there were 4 houses with 76 villagers there. Nowadays there is a glassworks in the village which employs most of Krzywołęcz's residents. There is also a monument dedicated to the memory of Home Army soldiers in the nearby "Grzybów" forester's lodge. Krzywołęcz belongs to Koniemłoty Roman-Catholic parish. The village is divided into three parts: Krzywołęcz (central part), Kolonia Podlesie Krzywołęcz ("Woodland Colony"), and Stara Wieś ("Old Village").