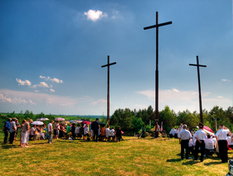 Jasień is a picturesque village located nearby the Czarna valley. Three large, wooden crosses standing at Kobryniowa Hill are the distinctive spot of Jasień's scenery; they are often referred to as the "Golgotha of Jasień". Initial crosses were built in the interwar period by Ignacy Kobryń, who moved to Jasień from the vicinity of Częstochowa. Those crosses were destroyed during World War II, then rebuilt during early 1990s and ceremoniously consecrated in 1994.

The village has access to springwater considered to be very healthy by locals. The picturesque surroundings, the closeness of Czarna river and Chańcza bay are very conductive to farm tourism in Jasień.

The village of Jasień has a long tradition. Early on, it was called "Czerkiesy", or "Cierkiesy". It is unknown whether any kind of connection to the Caucasian people called Circassians exists (due to the names' striking similarity in Polish). Supposedly, according to local tale, the reasoning behind that name were the hills surrounding Jasień from nearly every direction.