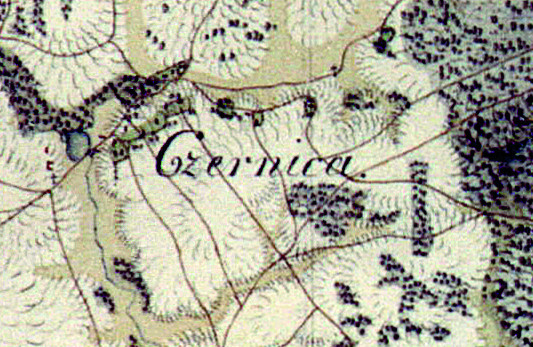 Czernica is a village surrounded by woods rich in mushrooms, berries and blackberries. It currenty houses about 200 residents. Czernica belongs to the parish of Kurozwęki, wherein lies the Assumption of Mary and St. Augustine Church.

Czernica itself is also rich in places of religious worship. A large cross was placed near the road leading to Czernica by pilgrims traveling from Stalowa Wola to Częstochowa. Each year, on the 6th of August, an outdoors mass for pilgrims is held by that cross. Going further towards the village one will find a wayside shrine dedicated to a forest ranger who was killed there. That shrine is known as "Kapliczka Obrazkowa".

There is a scenic lake in the village itself; swans can be seen there quite often. Czernica is surrounded by many interesting locations, such as Staszów, Kurozwęki, Szydłów, Rytwiany, Wiśniowa, Chańcza bay and Golejów lakes. Fresh air, picturesque surroundings and charming nature of Czernica make it an excellent place for spending some free time.

Historic records from the 19th century state that in 1827 Czernica had 16 households with 136 residents, and it also owned a distillery. Czernica was considered a part of Kurozwęki back then.