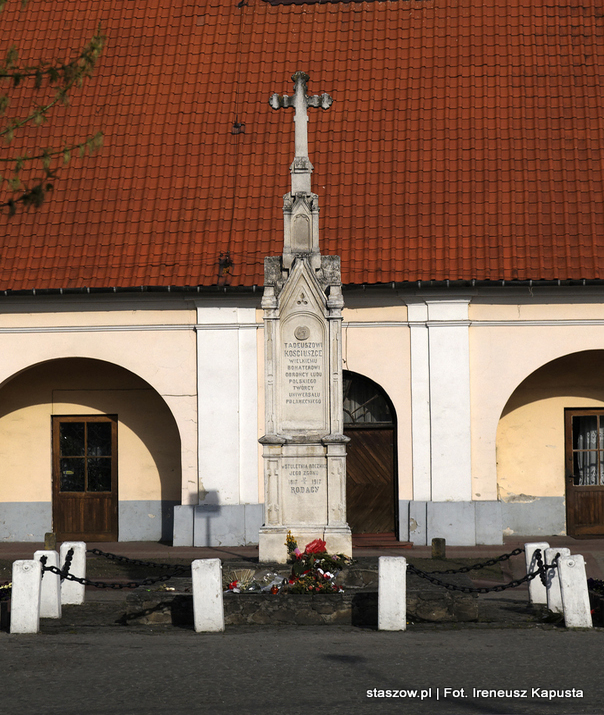 Located right next to the Town Hall, the Memorial Statue is the place where most important patriotic ceremonies are held: the Constitution of 3rd of May ceremonies and the National Independence Day ceremonies, celebrated on the 11th of November.

For many years the Memorial was simply called "the statue", since it was rebuilt, repurposed and relocated multiple times in the past. It could also be called the only "traveler statue" in existence, since most likely no other monument in history had switched places that many times.

The statue was not always dedicated to Tadeusz Kościuszko. It was built in 1864 after the January Uprising as proof of gratitude towards Tsar Alexander II for liberating the peasants.

The statue in its original form was located at a square to the west of Town Hall, near Opatowska street. A regiment of tsarist cavalry, which was stationed in Staszów right until the outbreak of World War I, used to parade near the statue. In 1917, which marked the 100th anniversary of Tadeusz Kościuszko's death, the statue was repurposed and a metal medallion with Kościuszko's likeness and an inscription honoring his deeds replaced the original plaque. During World War II German soldiers removed the statue and relocated it to Krakowska street, where it remained until 1964. Afterwards the statue was relocated to the old cemetery by St. Bartholomew church. In 1981 it returned to the vicinity of Town Hall, only this time on its eastern side, where it remains to this day.

For many years, a plaque honoring the memory of Polish guerrillas was attached to the memorial statue.